Try it with :
ROTARI BRUT

The smacafam is a savory dish of the Trentino tradition, which is prepared mainly at the end of the Carnival period. Its name (literally "crush-hungry") refers to the ability of this dish to satisfy the appetite. This is a soft pie to be consumed hot as main dish, although it  can also be coupled with tasty cold cuts, cheese and fresh salads. Do not have rush to eat it the same day, according to the tradition the smacafam is a dish for "ancòi e per doman", that is it is good today but the next day even more. 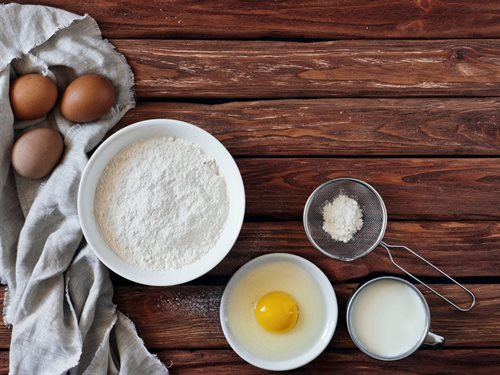 
Preparation
Preheat the oven up to 200°.
Peel the lucaniche, making sure to keep a few slices for the final decoration.Crumble and fry them together with the slices of speck or lard in a pan until they are crispy. Using a small colander, remove excess fat and keep it aside and warm. While the meat is cooling, beat the eggs together with a pinch of salt and pepper, pour slowly the milk and mix until a smooth batter is obtained. Then, add slowly the flour and the browned meat. Stir well.Put the dough into an baking pan oiled with the warm fat of the meat and dress the surface with the slices of lucanica.
Bake for about 30 minutes, or until the surface is golden-brown.Serve hot, accompanied by a fresh salad.